The Tauern mountain range is part of the Central Eastern Alps and features some of the highest peaks in Austria. The Venediger Group includes about 20 mountains ranging from 9,843 to 12,028 feet (3,000 to 3,666 meter), and the Glockner Group features Austria highest peak, the 12,461 feet (3,798 meters) Grossglockner.

The National Park “Hohe Tauern” is the largest in Austria, and the “Tauern Cycle Trail” runs along its northern boundary. The 695 square mile (1,800 square kilometer) park encompasses 246 glaciers and 304 mountains at 9,000 feet (2,743 meters) or higher. The “Tauern Cycle Trail” allows discovering one of Austria’s most beautiful regions. It runs along the banks of the Salzach River and passes through dozens of picturesque towns, yet it manages to avoid busy roads. While the 100-mile path is one of Europe’s most popular touring routes, it never feels crowded. 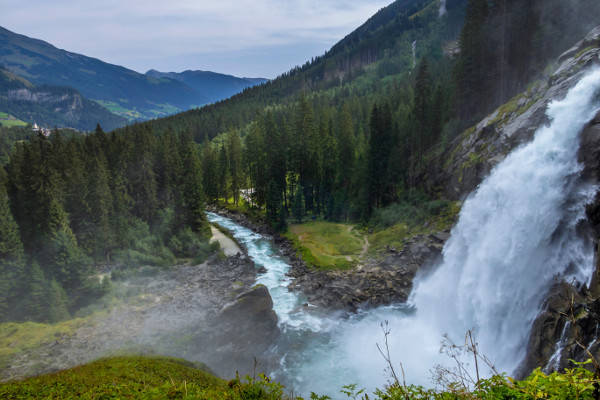 The clearly marked path starts in Krimml, a small mountain village and popular holiday resort at an elevation of 3,500 feet (1,067 meter). It ends 100 miles (161 kilometers) and over 2,100 vertical feet (640 meter) later in Salzburg. Krimml is well known for its waterfalls. With a total drop of 1,247 feet (380 meter), the Krimml waterfalls are among Europe’s highest and a source for the Salzach River.

Following the river downstream, the Tauern Cycle Trail will gently sloop through the Rosental valley and pass the towns of Neukirchen, Bramberg, and Mittersill before reaching Zell am See after approximately 36 miles (58 kilometers). The small town of about 10,000 is a major tourist destination on picturesque Lake Zeller. The Hundstein is with 6,946 feet (2,117 meter) the highest peak in the area and provides a dramatic backdrop when seen from across the lake. The city itself dates back to Roman times and the St. Hippolyte Church is the oldest known building in the region. 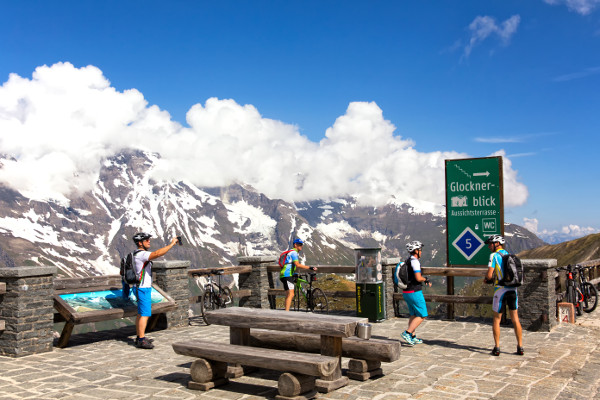 Following the route to Bischofshofen, cyclists can enjoy grand views of the Grossglockner, Austria’s highest peak. They will pass the town of St. Johann Im Pongau, the most important shopping and tourist center in the region. St. Johann is famous for the scenic Liechtenstein gorge, open from mid-May to the end of October, and a beautiful cathedral.

From here, Salzburg is another 36 miles (58 kilometer) ride through the Salzach meadows. A little climb to the 1,713 feet (552 meters) high Lueg pass will reward cyclists with a lunch-break at a rustic guesthouse.  On a downhill slope, the settlements of Golling and Hallein are passed. Hallein is a historic town close to the German border known for its salt mine. The name Hallein is derived from the Celtic word hall for salt, and the settlement can be traced back over 4,000 years.

After a short ride and a little bit more traffic, the city of Salzburg is reached. The city center, better known as the “Old Town,” is one of the best-preserved north of the Alps and listed as a World Heritage Site since 1997. Famous for its baroque architecture, Salzburg is the birthplace of the 18th-century composer Wolfgang Amadeus Mozart. A castle called “Hohensalzburg” dominates the view and is one of the largest in Europe. With three universities, Salzburg is filled with the liveliness of a large student population. Many restaurants and cafés dot the city, and visitors outnumber locals by a large margin in peak times.

The cyclist can continue to follow the route along the Salzach and later the Inn. After crossing the border to Germany, they will pass through the picturesque towns of Burghausen and Braunau before reaching the city of Passau. At this point, they will have reached the Danube River. The landscape has changed, and majestic mountains and high peaks have disappeared in the distance. Instead, rolling hills and flat passages great cyclists and the early morning view is usually softened by a light mist.

If cyclists prefer to focus on burning calories and getting back in shape, the more active crowd can simply reverse the trip and travel from Passau or Salzburg to Krimml. Many uphill passages will certainly help to get back in shape after a long winter slack.

The best months to travel are usually Mai – June and September – October. Hotels enjoy their peak summer season in July and August when Europeans take long vacations. Hot temperatures at lower elevations can also limit the fun factor during this time. Cyclists will notice that Austrian’s and German’s always find reasons to celebrate. Town festivals are common, especially during the fall season, and the streets are often closed to traffic and filled with tourists sampling local cuisine, wine and beer from hundreds of vendors.