3 Exotic Fruits To Try When You Visit Malaysia

If you have set a personal goal of visiting Asia one day, the most popular destinations that would intuitively come to mind most probably are Japan, Thailand, and maybe China. Japan has a such unique culture, China has a rich history and Thailand is famous for being one of the partying hotspots in the world.

Somewhere among the list of popular Asian countries to visit, that does not get as much fanfare is Malaysia. And those who revisit Malaysia over and over again usually do so for the food paradise that it is. The diverse food culture is partly due to the fusion of various different cooking styles and tastes that different cultures have brought to the shores.

While the population is primarily Malays, Chinese people have long made a mark in Malaysian history and brought their cooking expertise along with them. On top of that, the country was once part of the British colony. Giving western cuisine has had considerable influence on the evolution of Malaysian food as well.

Yet when tourists talk about the good food in Malaysia, it is seldom about the best steaks in fancy restaurants or the funkiest cocktails in bars spotting a fancy name. It is about street food and exotic fruits. 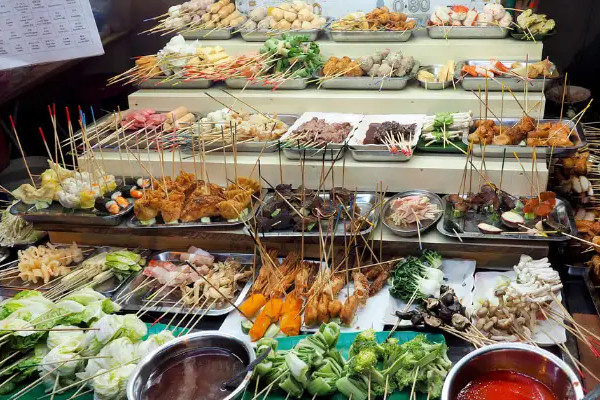 Some of the most popular street foods that have gained infamy in that part of the world are fried rice cakes (char kway kak), fried rice noodles (char kway teow), laksa which is a noodle dish served in sweet and spicy soup, and the heavenly icy dessert that is cendol. That’s without mentioning nasi lemak which is a to-die-for dish consisting of rice cooked in a pandan leaf and coconut milk.

If you like a more natural diet, then the buffet of exotic fruits that line up Malaysia streets will be more than able to satisfy your taste buds.

The most notorious of which is durian. This is one aggressive-looking fruit with a hard husk lined up with sharp bulky thorns. Yet with its beastly appearance from the outside, there is unrivalled beauty on the inside.

But I have to warn you. Durian is a polarising fruit. Either you love it to the heavens or loathe it to the core. The aroma can be so repulsive to so many people that it is the one fruit that is specifically banned in almost all hotels. Saying that a lot of people still love the taste of durian even when they cannot stand the smell.

Because this is the most expensive fruit in Malaysia, you might want to learn some simple tips on choosing a good durian before buying one.

Another exotic fruit that almost always accompanies the durian at fruit stalls is mangosteen. It is often said that durian is the king of fruits and mangosteen is the queen. Mangosteen has a rind that is dark purple in colour.

It easily opens up like how you would crack open a peanut. After which the white flesh of the fruit is revealed accompanied by a sweet fragrant scent that can be too tempting to pass over.

An old folk tale is often told about how durian raises your body temperature, and mangosteen lowers it back to normal. Once you have had your fill of durians and mangosteen, a fruit seller might then feel that you are ready for some cempedak. This is a fruit that looks very similar to jackfruit. It even tastes like jackfruit but the locals would be laughing if you insist that it is indeed jackfruit.

It is generally smaller and has a much stronger scent of sweetness. You might also find the amusing display a seller puts on when opening the fruit oddly satisfying. Locals love cempedak so much that they even fry the pulps to create cempedak fritters.

For the street food culture alone, Malaysia is worth a spot in your shortlist of Asian countries to visit one day.

And if you worry about a language barrier, be assured that most people do speak English. Especially if you are visiting the capital Kuala Lumpur.

How to find your travel buddies to join you on your adventures?